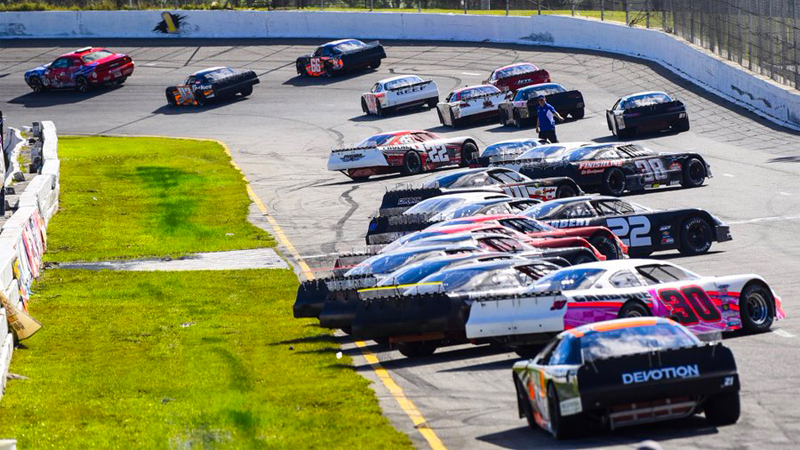 1: This will be the second race for the Southern Super Series at New Smyrna Speedway.  A year ago, Jeff Choquette beat out his teammate Stephen Nasse for the win.

2: Jeremy Pate leads Stephen Nasse by 14 points for the Southern Super Series title.  Jack Garcia is 19 points back in third.  Pate has never won the title, while Nasse was the 2017 series champion.

3: Saturday’s race will be 100 laps in the annual Hart to Heart 100.  Two points races remain following the Hart to Heart 100 after the All American 400 added to the points-paying schedule in September.

4 – All this leads up to the track’s annual Florida Governor’s Cup 200 on November 15. Many of the same drivers who will race this weekend will be back for that weekend for the last major Super Late Model race on the Florida east coast.

5 – Brad May and Michael Atwell will be contenders this weekend, as they both sit atop New Smyrna’s David Rogers Super Late Models points standings tied at 265 markers.

7 – This will be the 93rd race in the Southern Super Series, with 33 of them coming in the state of Florida.

8 – Bubba Pollard is the all-time series winner, having won 28 times in the series.

9 – Stephen Nasse grew up calling New Smyrna Speedway his home.  The 2017 SSS champion didn’t really start clicking off wins in the series until the last few seasons.  He has two wins this year, one at Five Flags Speedway (FL). and the other at Crisp Motorsports Park (GA).

10 – Speed51.TV will have live coverage of this event, which is now available on Roku, Amazon Fire, Apple TV, iOS and Android devices. Simply search “Speed51” to download the free app today.