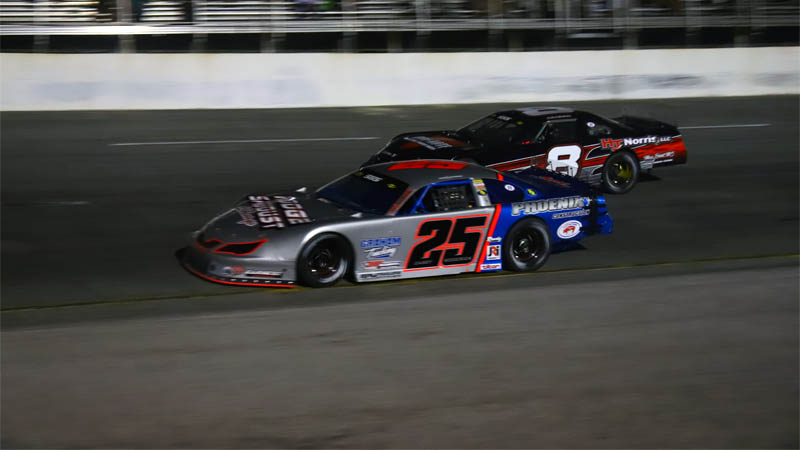 One year ago, the Blizzard Series used a heat-racing format to line up the field for the third round of the Super Late Model series at Five Flags Speedway (FL).  That format will return this weekend, as the Blizzard Series takes center stage on Friday, July 31 at the famed half-mile.

Blizzard Series features are traditionally between 100 and 150 laps.  With the heat-race format, fans are instead greeted to a 75-lap sprint race for the Super Late Models, promising an action-packed event as racers battle their way to the front of the field.

The field for that feature race will be set by a group of four heat races earlier in the evening on Friday, with competitors being drawn blindly into starting lineups for those heat races.  Each heat race will be 10 laps, giving fans 115 laps of racing on the evening for the Super Late Models.

Last year, Casey Roderick finished second in the 75-lap feature when the heat race format was utilized after starting 12th in the main event.  The Georgia racer likes the added excitement the heat races bring to the table.

“I think it adds some excitement to it.  I think this will mix it up a little bit,” Roderick said.  “You might take a chance at tearing your stuff up before the feature race but it adds a little excitement to everything and mixes up where everybody’s at.”

“When we did it last year, I had to start 12th because I finished third or fourth in my heat race.  Some of these cars are better on a short run and others are better on a long run, so you have to get your act together to have a shot at it.”

Performing well in the heat races will not only start a driver closer to the front of the feature field, it could also give a driver an extra $5,000.  If the winner of the main event finishes fourth or better in his or her heat race, that driver will pocket $5,000 courtesy of Phoenix Construction.

Along with the Southern Super Series competitors, there will also be feature events for Five Flags Speedway’s Outlaw and Pure Stock divisions as part of Friday’s racing program. Advance tickets are on sale at 5flagsspeedway.com.

The event will also be streamed live on Speed51, with more information on the broadcast coming later this week.