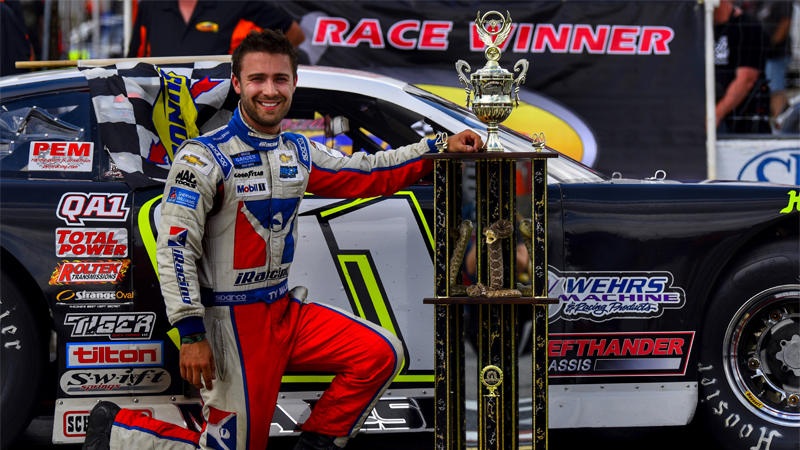 Majeski Stamps His Name Next to a Great at The Rattler

Ty Majeski has long established himself as one of the top competitors in Super Late Model racing.  On Sunday at South Alabama Speedway, Majeski stamped his name alongside one of the all-time greats in the Rattler 250 history books.

Majeski scored his third career victory in the crown jewel Super Late Model event.  With the third win, he is now tied with Ronnie Sanders for most wins in the event.

It’s an accomplishment not lost on Majeski, in a season already full of monumental accomplishments for the Wisconsin racer.  Majeski earned his 100th career win earlier in 2020 during the World Series of Asphalt Stock Car Racing at New Smyrna Speedway (FL).

“That’s pretty special,” Majeski said in victory lane.  “Obviously, this is one of the crown jewels.  We’re going up against some of the best in Late Model racing.  That’s why we come here. It’s a great event, great people.  We love supporting the Southern Super Series and John [Dykes] and everyone at South Alabama Speedway.”

This year’s Rattler 250 was postponed to May, creating a much hotter environment for the event traditionally held in March.  This presented a challenge for all competitors, as they fought to maintain grip on the treacherous Alabama bullring while ambient temperatures broached the 90-degree barrier.

“I was just trying to keep the right-rear on it.  I think we were all fighting a little bit of free-in.  Just tried to find a little bit of lateral grip because of the lack of grip on this hot day.

Majeski led 133 of the race’s 250 laps.  The Wisconsin native officially took the lead for the final time on lap 198 after battling throughout the race with Bubba Pollard.  It was another in a list of duels between the two Super Late Model standouts.

“I think I caught him when he was riding,” Majeski stated.  “He didn’t really race me too hard.  Some days we hit, some days he hits it.  I feel like we both push each other.  It’s a great battle week in and week out.  Thankfully we were able to come out on top of this one.”

2019 Rattler 250 winner Giovanni Bromante passed Pollard in the closing laps to finish second, one spot shy of a back-to-back visit to victory lane.

“Anthony [Campi] gave me a great car,” Bromante said.  “We made some solid adjustments.  We just needed a little more time to get up there with Ty.  I’m very thankful for a second place finish, and I’m glad the car is in one piece.”

Pollard came out of the event with a third-place finish, pleased by the progress his team showed during the weekend to run near the front of the field, but didn’t have enough to challenge Majeski for the win.

“We’re happy with third, I’ll say that one time.  As far off as we’ve been, we made our program a lot better and it showed today.  The 91’s good.  They’re fast.  When you race with the caliber of guys here, it only takes a little bit to be off.  We’ll come back and try again.”

The next event for the Southern Super Series will take place at the home of the Snowball Derby, Five Flags Speedway (FL).  That race is scheduled for June 25, and will also be the first race of the 2020 Blizzard Series.

Race fans who missed Sunday’s Rattler 250 can click here to watch an on-demand replay of Speed51’s broadcast of the event.