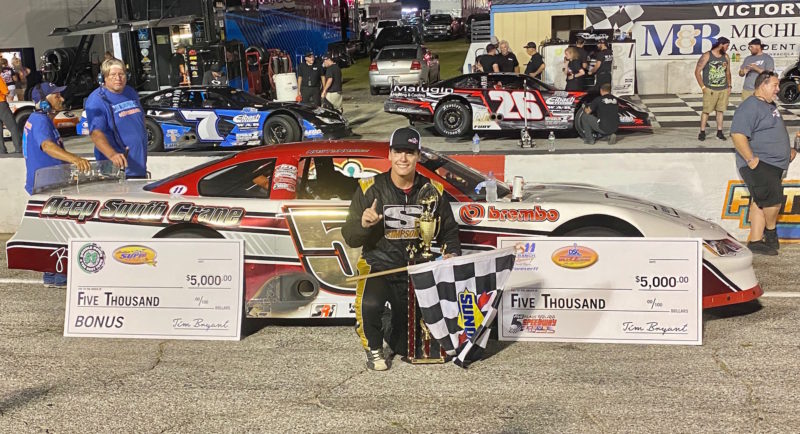 Nasse Gets Redemption in First Trip Back to Five Flags

Six and a half months ago, Stephen Nasse took the checkered flag first in the Snowball Derby, only for the win to get taken away in post-race technical inspection.  In his first trip back to Five Flags Speedway since his highly-discussed disqualification, he made a statement Friday night.

Nasse took the lead from former Snowflake 100 winner Hunter Robbins on lap 65 and led the rest of the way, taking his first-career Blizzard Series win in the #Forever11 Tribute 100 as part of the Rowdy Energy Twin 100s.

The victory even caught Nasse himself off guard, admitting the Blizzard Series races aren’t usually his strong events at Five Flags.

“It feels really good to come back and get some redemption.  It was definitely a heartbreaker at the Derby and I least expected it to come at a Blizzard Series race in the heat of the year,” Nasse told Speed51.  “At only 100 laps it’s not our cup of tea, so to be able to come out and do it like that [is great].”

Even after passing him for the top spot, Nasse could not drive away from Robbins in the waning laps, even losing the lead to him at one point before an immediate caution relegated scoring back to the previous lap.

“I was able to take off on that restart and get some distance and maintain it.  It was a hectic last couple laps, I was nervous.  I know Hunter is a hard racer and we’ve had our problems in the past.  I appreciate him leaving them there and running me clean.  I was ready for that shot to the bumper and fortunately it never came.

“They definitely made me work for it there at the end, I was holding my breath.  With everything we’ve been through here recently, to come off as strong as we have here recently speaks volumes about this team.  They work their tails off and I think there’s a lot more coming.”

With $10,000 already in the bank from Friday night’s win, Nass will have a shot at $25,000 Saturday night in what would be the biggest payday of his career. In addition to the $5,000 payday, Nasse will have a shot at the $5,000 "Double Down at the Next Town" bonus, the $10,000 #GetRowdy Challenge if he can sweep the weekend and the $5,000 Phoenix Construction Best Average Finish bonus.

He will start 12th on Saturday night and will once again have 100 laps to get it done.

While Nasse ended Friday's race in victory lane, Casey Roderick had his share of the spotlight over the course of the night.  After not having turned a lap at speed in his new self-owned No. 25 Super Late Model before Friday, he drove through the field with little effort after an early pit stop for a fluid leak.  However, after making a bid for the lead with less than 25 laps to go, Roderick was forced to the pits again when race officials discovered a leak in the rear end, ending his night prematurely.

“It’s all brand new everything, really.  Trailer, pit box, car, everything.  I’m proud of what we were able to bring to the racetrack,” Roderick said.  “A lot of hard work went into getting the car done.

“It was kind of a surreal moment for me.  I came here with my own program and we had the fastest car on the racetrack tonight.  I think a lot of people saw that and I’m proud for that.”

Robbins ended the race in second, his best finish in a race car since he won a Pro Late Model event at South Alabama Speedway in 2015.  Bubba Pollard, Jeremy Pate and Carson Hocevar rounded out the top five.