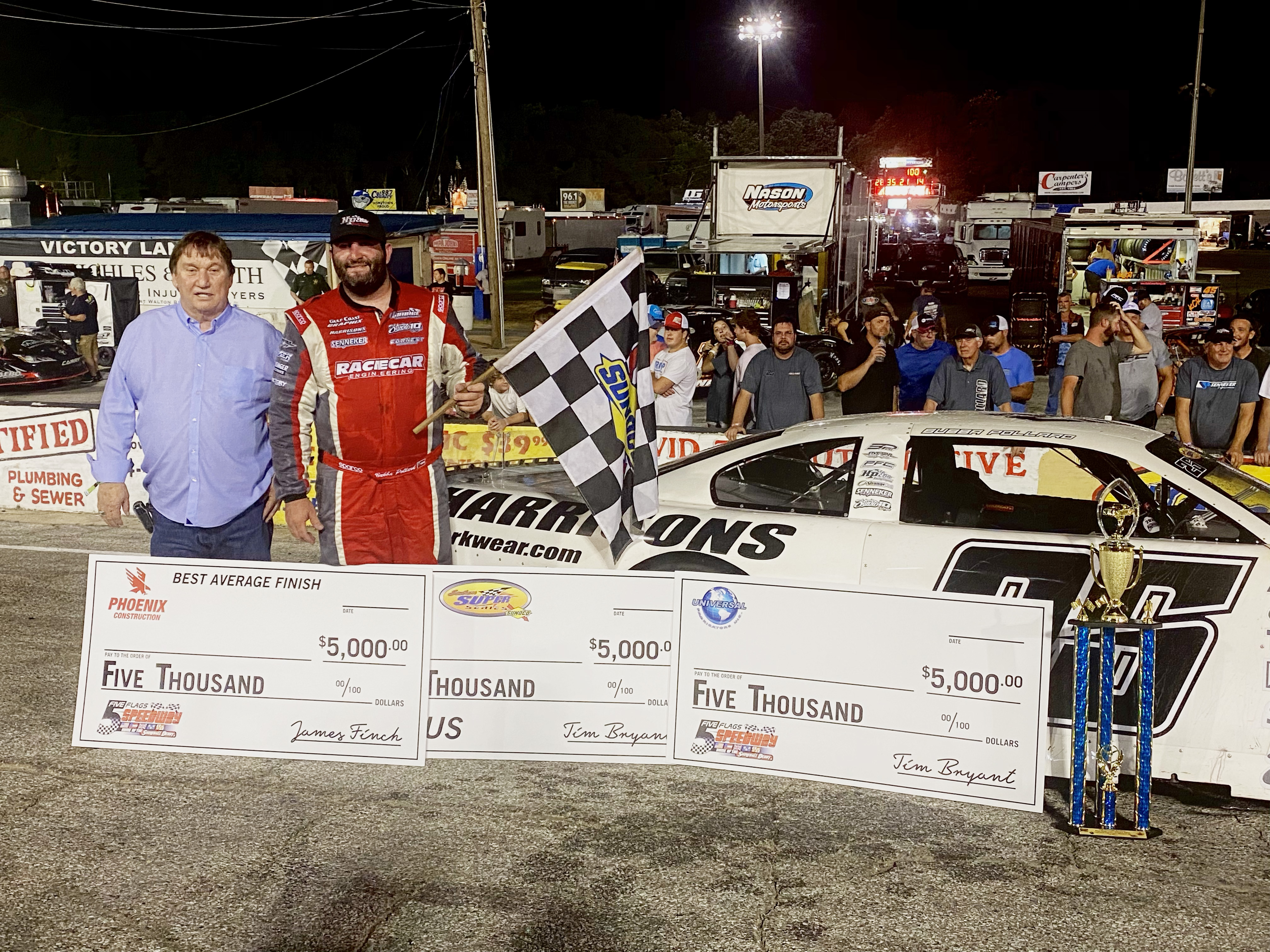 When the money is on the line, Bubba Pollard always seems to rise to the occasion.  That proved to be true again Saturday night at Five Flags Speedway (FL) during the second half of the Rowdy Energy Twin 100's for the Blizzard Series.  Pollard charged from his 10th-place starting position to capture the 21st Blizzard Series of his career and three checks totaling $15,000.

In addition to collecting a $5,000 check for the victory, Pollard also collected the Southern Super Series "Double Down at the Next Town" bonus, a bonus that guarantees a $10,000 prize for all races in 2020 if the winning driver participated in the previous race.  To put a cherry on top, Pollard also earned the $5,000 "Best Average Finish" bonus put up by Phoenix Construction for Friday and Saturday's doubleheader at Five Flags.

"It's been a great weekend with everything that went on with David (Rogers) and being able to run his race car last night.  Man, jumping back into mine today and getting the victory; it doesn't get much better than that," Pollard said.  "Pretty cool, it was a special weekend."

After finishing third in Friday night's race while driving David Rogers' TM Ranch No. 11, Pollard lined up 10th for Saturday's race as a result of a 12-car invert.  Driving his own No. 26 Super Late Model, the Senoia, Georgia driver picked his way through the field during the first half of the race before putting the pressure on the leaders during the second half of the race.

When early race dominator Kyle Plott fell off the pace on Lap 46 with a mechanical issue, young gun Jake Garcia took over the lead with Pollard closing in behind him.  With lapped traffic slowing the pace of Garcia, Pollard capitalized on Lap 74 by powering to the inside of Garcia and taking over the top spot.

"The kid is good, there's no doubt about it.  He's going to be good, he is good and he does a great job," Pollard began.  "I just knew he struggles on restarts a little bit and he struggles in lapped traffic, so I had to make some gains there and capitalize on that.  That's what I did and just waited until he made a mistake to be able to pass him."

"I was just trying to get out of the lapped traffic as efficiently as I could without burning my tires up, but at the same time get through them quickly," Garcia stated.  "I caught a few at the wrong time and that let him get up to my back bumper, and he's really good so he got by me."

From there, a long green flag run allowed Pollard to run away from the field over the final 25 laps of the race.

Garcia, the runner-up finisher in last year's Snowball Derby, turned in another strong showing by finishing second behind Pollard.

Connor Okrzesik finished fourth, while Casey Roderick charged from his 23rd starting spot to finish fifth. Friday night's winner Stephen Nasse, who had a shot at a $35,000 weekend if he pulled off the sweep, finished sixth.

A full broadcast replay of Friday and/or Saturday's Rowdy Energy Twin 100's at Five Flags can be viewed by clicking here.

The next race on the Southern Super Series schedule is the Rumble by the River 125 at Montgomery Motor Speedway (AL) on July 11.