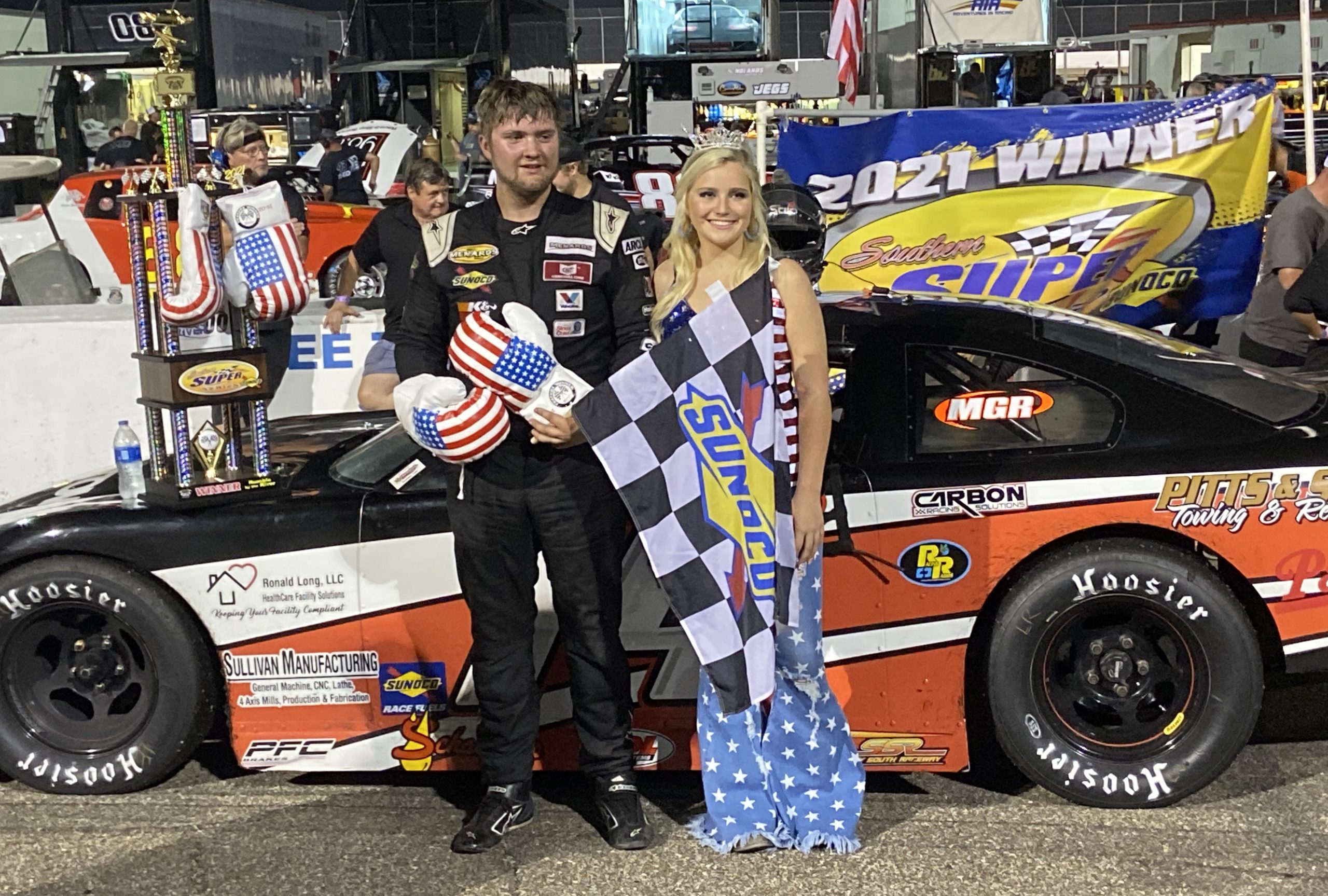 Connor Okrzesik went over 22 months without a Super Late Model victory prior to Saturday’s Southern Super Series race at Montgomery Motor Speedway. The Grand Bay, Alabama driver ended that drought in impressive fashion by passing Stephen Nasse with 30 laps to go and holding on to win the Rumble By the River 100.

(Original story by Speed51, posted with permission from Speed51)

Connor Okrzesik went over 22 months without a Super Late Model victory prior to Saturday’s Southern Super Series race at Montgomery Motor Speedway. The Grand Bay, Alabama driver ended that drought in impressive fashion by passing Stephen Nasse with 30 laps to go and holding on to win the Rumble By the River 100.

“That was awesome. I needed this to get back on track,” Okrzesik said.  “We had a rough start to the season, but we really picked it up the last couple races and finally got one. No better place than here. I’ve been so close so many times. It’s great to finally get one.”

Nasse started from the pole following the qualifying redraw and led the first three laps before California invader Jeremy Doss took command.  However, Doss’ time out front was short lived as Nasse worked his way back by Doss to retake the lead on Lap 14.

From there, Nasse built up a commanding lead as Okrzesik worked his way into the runner-up position after starting sixth.  A restart with 30 laps to go ultimately gave Okrzesik the opportunity he needed.  He capitalized by powering around Nasse on the outside and never looking back to score his first win since his Southern Super Series triumph at Crisp Motorsports Park (GA) on August 10, 2019.

After the race, Nasse attributed rubber build-up on his tires as a factor that led to him losing control of the lead.

“The pace car pulled away on the back straightaway there and I got rubber all over my tires,” Nasse stated.  “The car just didn’t want to turn coming off of turn four on the restart. I didn’t want to get into Connor. I know he had a good run going last night. I’ve been racing clean with him lately so I figured we could race a little bit later on.

“Unfortunately, it just didn’t play out. I’m only human and made a couple mistakes. I hit that dang apron over there; that thing is pretty gnarly. It took me a while to kind of figure it out, and to be honest with you I didn’t think I figured it out until there at the end. It was a good day for the team. I wish we could’ve got another win, but one-two isn’t bad at all.”

As a result of his victory at Five Flags Speedway on Friday night and his second-place finish at Montgomery, Nasse unofficially claimed the $1,000 Florida-Bama Double for scoring the best average finish during the weekend.

Hunter Robbins followed up his second-place finish on Friday night at Five Flags with a third-place finish at Montgomery.  Doss completed a successful trip to the east coast by finishing fourth, and Kyle Plott completed the top five.

A full race replay of Saturday night’s Rumble by the River 100 will be available soon on Speed51.TV.