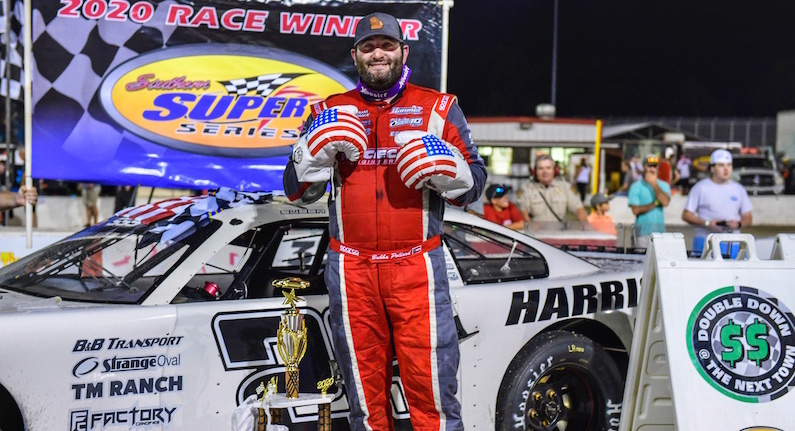 Pollard Beats SSS Drivers to the Punch at Montgomery

Beating a stout field of Southern Super Series competitors to the punch, Bubba Pollard got to wear the boxing gloves in victory lane Saturday night at Montgomery Motor Speedway (AL) after winning the “Rumble by the River 125” event.

Executing his signature long-run strategy, Pollard waited for the right moment to show his cards, passing on the outside groove late in the race and checking out as soon as he secured the lead.

“I figured you wear a pair of boxing gloves, so you might as well put it on them,” Pollard joked.  “I just didn’t want to show it too soon.  Our race car was good and you have to be able to turn in the center to run that outside and that’s what we were able to do.”

The win is Pollard’s second for the series just in the last month and adds to the veteran’s string of Late Model successes since the restart of the COVID-condensed 2020 season.

“We’ve hit a pretty good run here the last couple of weeks and have really been working hard all year,” Pollard said.  “It’s paid off.  These races are tough to win nowadays.  There’s so many great cars, it makes you work hard.  It’s special for us and our little group.  They’re a great team.”

At the other end of the nearly three-second gap cushioning Pollard’s lead was second-place finisher Jackson Boone. One more caution might have given Boone the chance to challenge Pollard on a restart for his first career Super Late Model win, but the opportunity never presented itself.  Still, a podium finish was welcomed by the young Tennessean after a difficult run several weeks earlier at Five Flags Speedway.

“Hats off to Bubba on the win,” Boone told Speed51.  “I hate it, I could taste those gloves at the end, but it is what it is.  It’s such a refreshing run after Pensacola where we struggled so bad and had a bunch of parts failures.”

While Boone was spared from mechanical misfortune this go-round, others were not so lucky.

With only 31 laps to go, then-leader Hunter Robbins dropped off the pace unexpectedly due to a problem with the drive train.  Before that, Kyle Plott, who also had a strong first-place run earlier on, had to be towed to the pits when a left-rear trailing arm broke on his machine.

Augie Grill, who was the only other driver able to run the outside like Pollard, worked his way from the back of the field up to second during the initial 50 laps of the feature only to drop back after a restart thanks to a variety of issues that seemed to plague the team since qualifying.

The youngest face in the field, 15-year-old Jake Garcia, rounded out the podium with a solid third-place finish.  Connor Okrzesik finished fourth while Casey Roderick collected another fifth-place run with his new machine.

A full on-demand replay of Saturday night’s Southern Super Series “Rumble by the River 125” at Montgomery Motor Speedway can be viewed by clicking here.

The next event scheduled for the Southern Super Series is on July 31 at Five Flags Speedway (FL), which will double as a Blizzard Series points race.