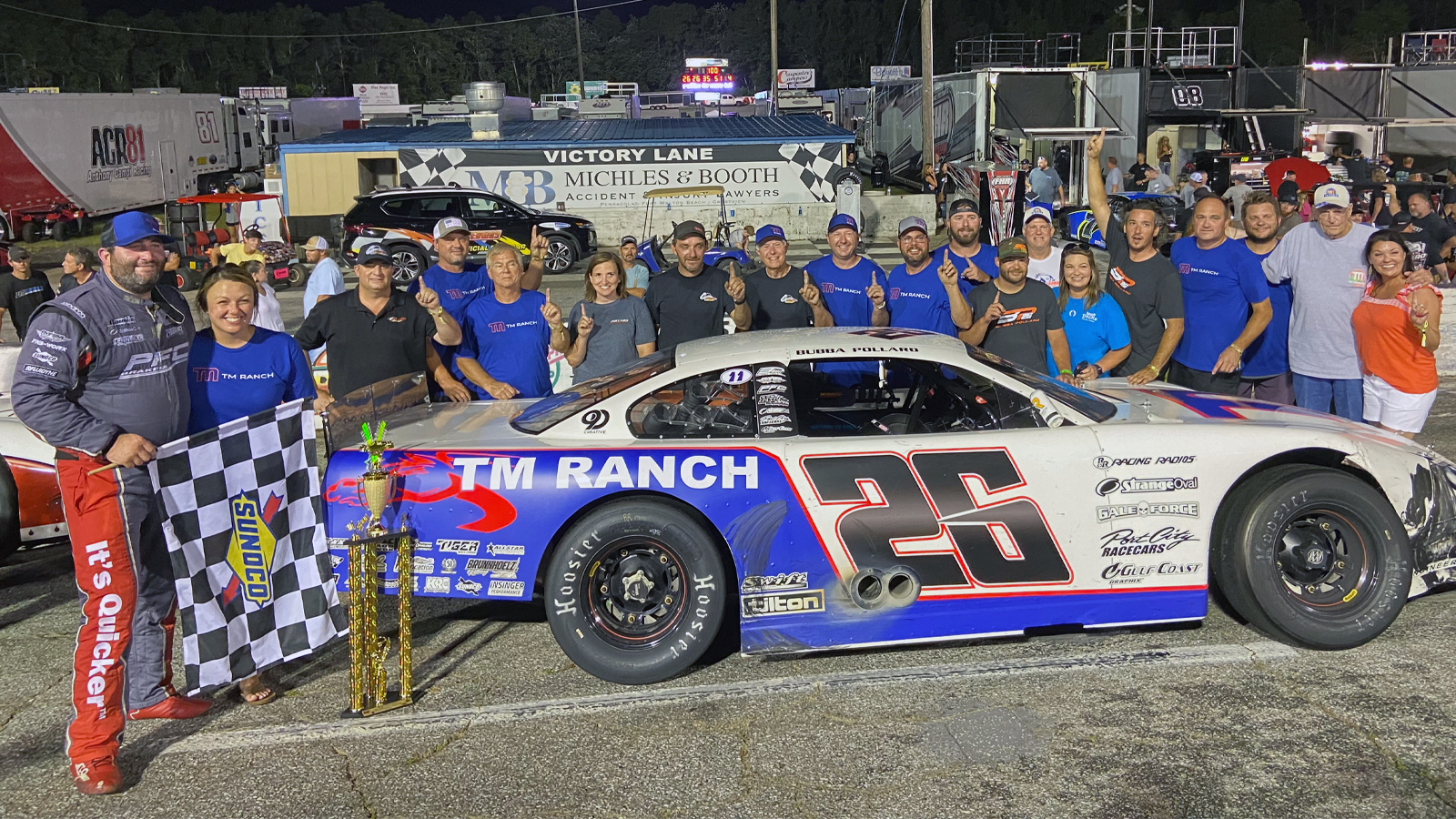 Pollard Breaks Winless Drought on Night One at Five Flags

Reposted with permission from Speed51.com

For nearly a year, Bubba Pollard has heard the doubters and naysayers telling everyone that would listen that the dominant days were over. Friday night’s results proved the king of the Gulf Coast is back.

Pollard rallied from the 17th starting position to nab the lead from Chandler Smith with just three laps to go to score the win in the Universal Fabricators 100 at Five Flags Speedway. It was Pollard’s first win of the 2021 season.

What an awesome race,” Pollard said. “That’s how you want to win them. We came from the back and kicked their ass.

Going through the winless drought had forced Pollard to change his normally calm, calculated driving style to a new, far more aggressive way of maneuvering.

With less than 25 laps to go, Pollard initiated a pass on a restart that will go down in Gulf Coast racing lore, and be discussed for years to come. Pollard forced his way to the inside of Jake Garcia and Grant Enfinger heading to turn one. All three drivers made contact, and Pollard squirted by on the bottom to go from sixth to third in one corner.

The caution came out immediately following the pass, setting Pollard up with another opportunity to gain ground as Michael Atwell tried to wrestle the lead away from Smith.

Pollard took second from Atwell with 10 laps to go. With five to go, he was just two car lengths behind, and coming to the two-to-go signal, he made his move. He drove to the inside of Smith down the front stretch and never looked back.

I’m usually not that aggressive, and not the type to go three wide,” said Pollard. “But when you come from 17th, haven’t been competitive in six months and haven’t won in a year, you want it bad. I was damn ready to go. I hate to be that guy, but when you want it as bad as I do, I had to make it happen.

Pollard won a dozen races in 2020, but his performance dropped mightily near the end of the year. He struggled all weekend at the Snowball Derby in December, needing a provisional to make the field, and parking car in the first third of the race saying that he was just too slow to be competitive.

He changed chassis manufacturers three times in a year, going from Senneker to VanDoorn, back to Senneker and now driving a Port City cage.

“We won 12 last year, and everyone called it a bad season,” said Pollard. “That’s how much people expect out of us, and shows how much pressure they put on us…and how much we put on ourselves. We had to make some changes with chassis, and that takes some time. We just have to keep growing and learning. We are going to get better.”

Smith dominated a race at Five Flags Speedway for the second time in 2021, only to have what appeared to be certain victory snatched away. In early June, Smith was cruising to a win in Pensacola before the engine expired.

On Friday, he could only watch as Pollard’s front bumper got bigger and bigger in his mirror in the closing laps.

“I knew he (Pollard) was gonna be trouble when he got into the top five,” said Smith. “He passed me fair and square and clean. If there was anything different I could have done, it would have been to block, and he would have had to move me.”

The race was plagued with multiple cautions in the second half of the distance, including a large multi-car tangle in turn four that ended the night for Johanna Long, Ross Kenseth, Michael Hinde and others.

Front runners Casey Roderick and Enfinger also fell victim to late-race misfortune and did not finish. Roderick had a tire issue, and Enfinger wrecked racing with Garcia in the aftermath of the Pollard three-wide move.

Attrition stuck over half the field, as only 17 of the 37 starters finished all 100 laps. Smith feels the slew of cautions hindered his chance to hold off Pollard.

“People just don’t have patience,” said Smith. “We are racing for 40 grand this weekend. I understand if you are in the back and frustrated, but it’s better to take home two purses than just one along with a big chunk of sheet metal. We kept having caution on caution on caution. It kind of felt like Knoxville in the Truck a few weeks ago.”

With the win, Pollard pocketed $20,000 on the first night of the doubleheader at Five Flags. A win on Saturday would give the Georgia driver one of the richest racing weekends of his legendary career.

When asked if he could pull it off, he had a simple reply.