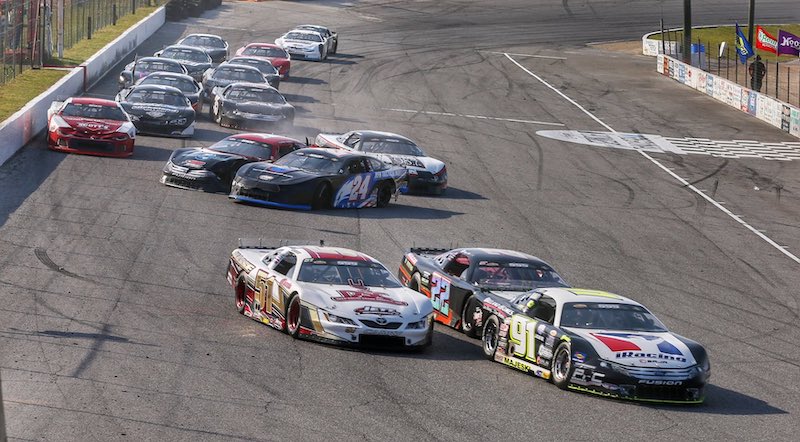 This year’s Rattler 250 at South Alabama Speedway featured as many twists and turns as the rattlesnake that was draped around Ty Majeski’s neck in victory lane at the conclusion of Sunday’s race. Here are some of the top storylines outside of Majeski’s history-making performance in the Southern Super Series opener.

This year’s Rattler 250 at South Alabama Speedway featured as many twists and turns as the rattlesnake that was draped around Ty Majeski’s neck in victory lane at the conclusion of Sunday’s race.  Here are some of the top storylines outside of Majeski’s history-making performance in the Southern Super Series opener.

WATCH THE RATTLER REPLAY ON SPEED51.TV

Florida’s Daniel Dye tallied arguably the strongest run of his young Super Late Model career Sunday, finishing third against a stacked field of competitors in the Rattler 250.  It was the best finish of his career in the Southern Super Series, improving upon a fourth-place finish at last year’s U.S. Short Track Nationals at Bristol Motor Speedway.

It was not without hard work for Dye, who started 20th in 33-car field.

“We just kept making good adjustments all day,” said Dye following the race.  “We started pretty deep in the field.  I think we came in more than anyone else, getting our car where it needed to be.  Here at the end, we found ourselves in the top five and had a couple of good restarts to put it P3.

“We had a good race with Nasse for second, but putting it third here at the Rattler 250 with the field we had this year is pretty awesome.”

Dye also relished the opportunity to silence some criticism with the strong run.  The Speed51 staff ranked Dye 26th in the talent-laden field at the Rattler entering the weekend.

“It’s pretty awesome.  Speed51 had us finishing 26th for this race.  They had the first two right, but the guy they had 26th finished third.  I can’t thank my team enough and all of our partners to do what we do.  To do stuff like this is living the dream.”

Bubba Pollard is not performing at the level he wants or expects, and he is not bashful about it.

“Terrible.  It sucked, there’s all there is to it,” said Pollard about his weekend at South Alabama.  “There’s no beating around the bush or trying to sugarcoat it.  We were terrible.  I don’t know what else there is to say.”

The official results from this year’s race show Pollard finished eighth.  However, the Georgia standout takes little satisfaction knowing how much he and his team struggled throughout the weekend.

“The only reason we’re in the top 10 is because everyone fell out.  We have a long way to go.  We just have to work hard.  That’s all.”

The team will go back to work, looking to improve on recent performances.

Hudson Halder saw an early end to his day, completing just 54 laps and finishing 27th.  However, the way his day ended got plenty of attention.

After contact with Jake Finch, Halder spun in turn two, where there is no outside retaining wall at the Kinston, Alabama race track.  Halder’s slide sent him into a dirt embankment, preventing him from going into the woods behind the speedway.

“We came in that first pit stop, made some adjustments and made the car better.  It started coming in and we passed three cars on the backstretch.

“Young, inexperienced kids, they think they can just wreck everybody.  They don’t know the work we put in to this stuff.  I touch every nut and bolt on this thing.  I’m sorry I’m getting a little emotional, it just sucks.”

Another pair of drivers were caught up in an incident with 10 laps to go Sunday, ending top-five runs for Hunter Robbins and Colin Garrett.

Robbins and Garrett were in fourth and fifth place, respectively, coming to a lap 240 restart.  Contact from Carson Hocevar directed Robbins into Garrett’s car on the inside line, sending those two into the outside wall at the end of the frontstretch.

“I feel like we got the rear tires picked up off the ground,” said Robbins.  “I don’t know, just got turned sideways a little bit and got ran over.  It was a tough deal.”

“We got going on that restart with 12 laps to go and I just got hooked,” said Garrett.  “The next thing I know, I was looking at the outside fence.  I just braced for impact, and that was that.  Somebody said the 14 [of Hocevar] got into the 18 [of Robbins] and it went from there.  It is what it is, short track racing.”

As can be the case in long-distance Super Late Model races such as the Rattler 250, attrition played a role in the race.  All American 400 winner Casey Roderick survived that attrition in Nashville last fall, but was its first victim on Sunday to finish 33rd.

“It looks like the oil pump belt broke and the motor locked up,” said Roderick.  “I saw the oil pressure drop and shut it off.  It’s unfortunate.  We had a really good race car.”

Roderick was disappointed after an early end to his day.  He started shotgun on the field after missing Saturday’s qualifying, but had confidence in his car to get through the field.

“The way it felt, it was going to be really good.  It could turn off the bottom really good.  It’s the best race car I’ve ever had here.  It just sucks, man.  They’ve been having problems with these oil pump belts breaking.  We’re going to have to find a different solution, because that’s a lot of money that just got burned up.  That’s the way it goes, though, that’s why we race.”

Meanwhile, Sammy Smith qualified sixth and spent almost the entirely of the day running in the top five in his Wilson Motorsports entry.  However, a mechanical issue ended his day five laps shy of the finish.

“We think a rear end or something broke.  We’re not sure yet.  It’s frustrating.  We know we had a good run, there.  We got a little tight when we put four tires on it, but everyone on the Wilson Motorsports team did a good job and we’ll get them at Greenville.”