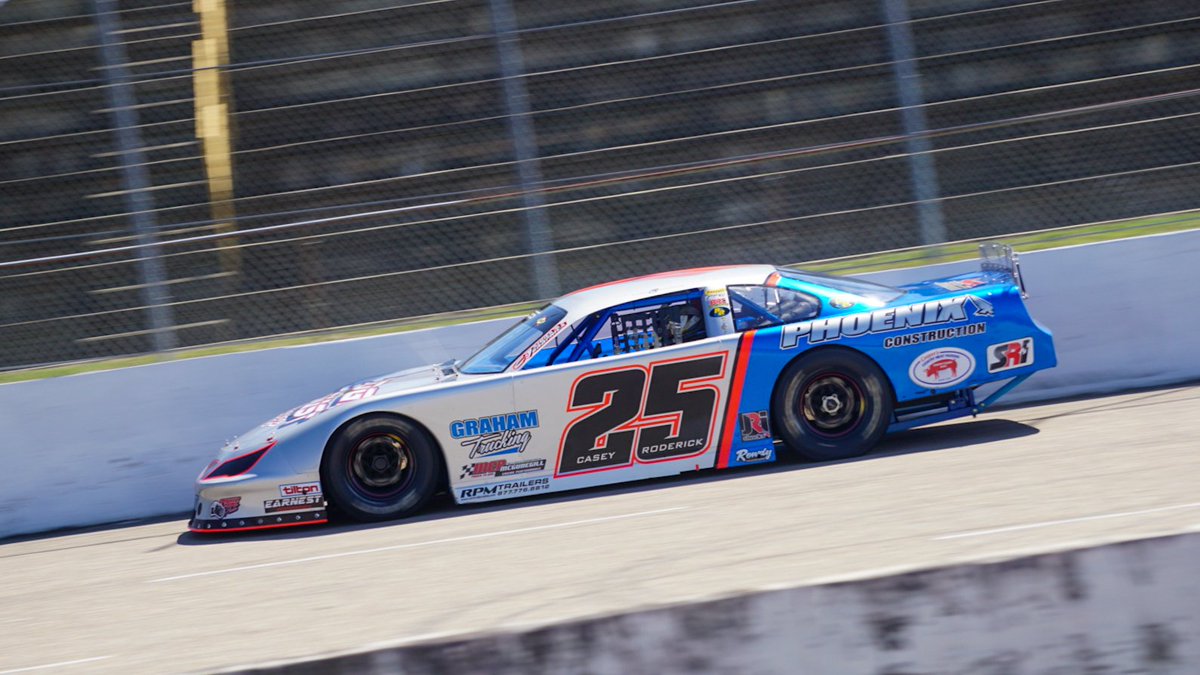 Roderick Returns to Five Flags Looking to Finish the Job

This season has been a year unlike any other for Casey Roderick.  After driving for several car owners over the years, he made the leap to driving his own equipment.  In three races is his own car, he’s finished in the top-five twice and has been a threat to win in all three.

The two-time defending Southern Super Series champion returns to Five Flags Speedway Friday night after showing he was going to be a force right out of the box.  In his first start of 2020, Roderick had worked his way through the field with relative ease and was racing for the lead late before having to pull off with a rear end issue.  In the second race of the doubleheader, he drove back through the field to finish fifth.

His first start in Rowdy Manufacturing car came at Berlin Raceway with Donnie Wilson last June, and he has been competitive in just about every race.  Friday night, he looks to close the deal and get his first win in Rowdy equipment.

“It just seems like ever since I started driving Rowdy cars I’ve led a lot of laps and had very good runs going, and something crazy happens.  Maybe I’ll get that monkey off our back this weekend coming up at Five Flags Speedway,” Roderick told Speed51’s “The Bullring.” I’ve been looking forward to it, I’m feeling confident in what we have equipment-wise.  The way the car performed the last time, I feel really good about where we ended that weekend.

This weekend’s Blizzard Series will see a new milestone achieved for Roderick and his family team.  While he had been last-minute additions to the doubleheader and at the Southern Super Series race at Montgomery, this will be the first time he will be able to extensively prepare for an event since building the car.

“I’m going to be down there Thursday for practice, it’ll be the first time since I’ve gotten the car done we’ve been able to go practice.  We got the car done last minute for that first Blizzard race and made Friday practice and that’s all I’ve got.  The car’s really close right off the trailer, so hopefully we can do that again.”

Roderick turned heads in his maiden start in the No.25, zig-zagging through a deep field and having a car capable of passing both on the inside and the outside.  The process of getting the car ready was one that he doesn’t take for granted.

He admitted he was emotional after exiting the first Rowdy Energy Twin-100 last month after the work he and his team had put into the car to make it to Pensacola.

“I think that car shows my personality and how I like to do things.  I built the nicest race car I could possibly build and the best equipment I could buy.  I told everyone out here I’m not going to do it unless I’ve got the very best and give myself a shot at getting as many wins as I could.  Just how the whole car came together and getting there last-minute and staying up for so many hours with my dad getting it done.

“We were on our way to winning that race our first time out.  I was a little emotional after the race just because of that,” he added.  “I know how hard everyone worked to get it done and that was literally our first time out.  We shouldn’t have gone but we did and we made it work.  I know as a racer for so many years now, I know what it takes to do all this and it’s hard work.  I’m just thankful to be a part of this opportunity and to have my own car, hopefully we can go down there and repeat what we did our first time out.”

As the third Blizzard Series race and the rest of 2020 approaches, Roderick has just one thing on his mind – win.  As he sets out on his own, he feels he has a lot to prove for who helped him, and the short track racing community.

“I think a lot of pressure would be released off my shoulders.  After driving for a lot of people with success, you don’t want to go out there in your own stuff and not perform well.  I’ve got a lot of pressure on me right now and we’re not able to race quite as much, hopefully that’ll change.  For all the people that helped me get this car going, I just want to get them a win.  Not only for myself, but for everyone who took part in getting this thing to the racetrack for me.  It would be a huge deal for me and everyone else that’s involved with this program.”

Click here to watch a replay of Monday’s episode of “The Bullring.”

Friday's Southern Super Series event at Five Flags Speedway will be streamed live on Speed51, with more information on the broadcast coming later this week.