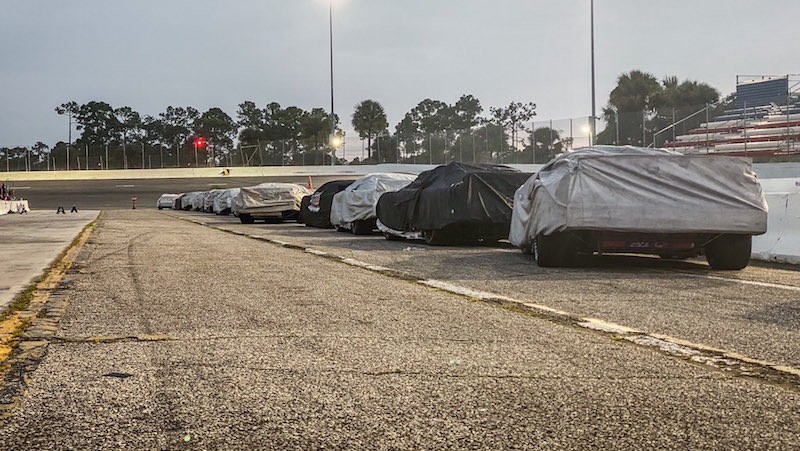 Despite the best efforts from New Smyrna Speedway and Southern Super Series officials, Saturday night’s Hart to Heart 100 has been canceled due to rain showers.  At this time, a planned makeup date has not been announced.

The decision to cancel the event came after persistent rain showers throughout the evening at the New Smyrna Beach oval.  Track crews attempted to dry the track a handful of times; however, a heavy rain shower drenched the racing surface just prior to 8:30 p.m.

Prior to the cancelation of the event, Stephen Nasse set fast time in the final Southern Super Series practice session.  With hopes of getting the race completed, officials made the decision to cancel qualifying and line the field up based on final practice results. Jesse Dutilly was scheduled to lead the field to the green flag following an eight-car redraw.

Next up for the Southern Super Series will be the Blizzard Series finale next Saturday night, October 24 at Five Flags Speedway.  The race will be the final Super Late Model race at the track prior to the Snowball Derby.

Jeremy Pate leads Stephen Nasse by 13 points in the battle for the 2020 Southern Super Series championship.  Jake Garcia and Bubba Pollard are not far behind, sitting third and fourth in the standings.

For more information on the Southern Super Series, visit www.southernsuperseries.com.