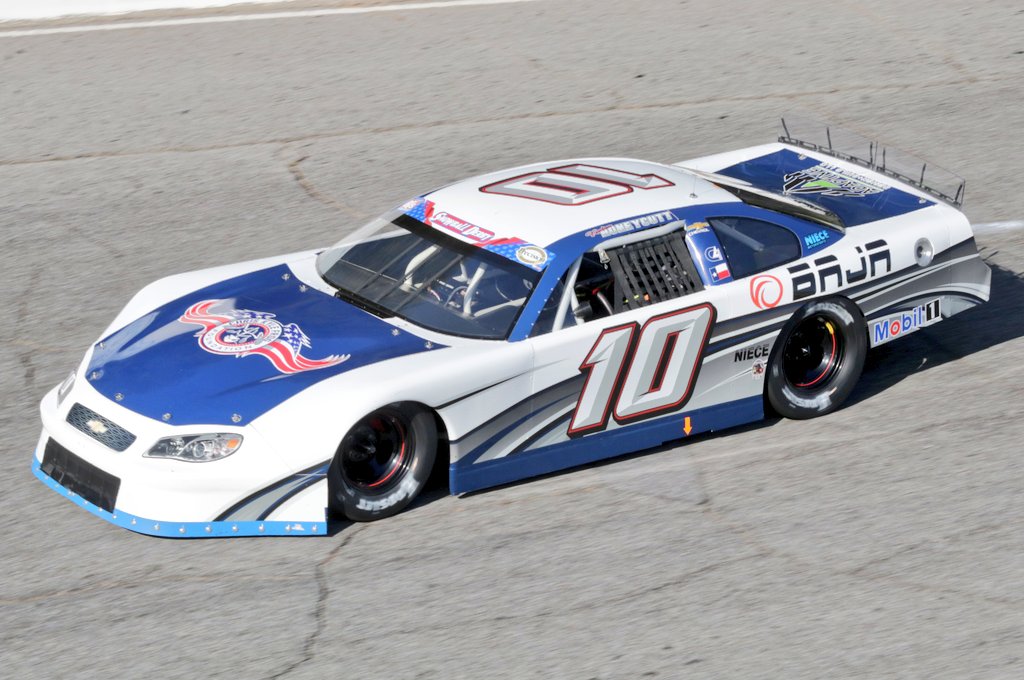 Kaden Honeycutt carried the Donnie Wilson colors during the Rowdy Energy Super Select Series in the sim racing world.  Several months later, the Texas driver will be sporting the “OKC Bandit” look once again, this time in the real world.

Honeycutt is the latest driver to join forces with Wilson in the Super Late Model ranks as he gets set to climb behind the wheel of the No.2 for Friday night’s Blizzard Series race at Five Flags Speedway.  This is a culmination of Honeycutt’s childhood memories, having made the trip to Pensacola several times to see Wilson race in person and becoming a fan of his in the process.

“It’s something I’ve wanted to do for a long time.  When I was younger and went to Five Flags to watch the Snowball Derby, I watched him all the time.  Every race and every opportunity I’d get to go there, I’d specifically watch his car because I liked his car the most,” Honeycutt told Speed51.  “It’s going to be awesome once I’m able to get in that car because it’s something special I’ve wanted to do for a long time.  We’ll finally be able to do that this Friday.”

It also gives him an opportunity to get some more experience in a Super Late Model and to learn from one of the top drivers in America.  Honeycutt has just five career Super Late Model starts to date, all coming at Five Flags Speedway.

As he continues to garner experience, he enters the event with some perspective.

“I don’t have as much experience with Super Late Model racing, I think I need to learn as much as I can.  We’ll see how Thursday and Friday goes.  It’s just something you need to look at from the right perspective and understand that you need to look at it the right way and learn from it.  Hopefully we can run some more.”

Two of his five previous starts in a Super Late Model came in the Snowball Derby each of the last two years, while also having took part in the last three Blizzard Series races.  His best finish to date at the half-mile is a sixth in the 2019 finale.

This will be the first time he takes part in heat races with the Blizzard Series, and he’s expecting it to play out differently than what he has seen in the past.

“It’s not as long of races, so you don’t have to be as patient.  You don’t have to run as hard in the Snowball as you do the Blizzard.  You should find every way to get everything out of your car and see what you can do.

“We’re going to have heat races and only a 75 lap race, that’s not a long time.  The patience will not be as much during that race,” he added.  “You can definitely save some stuff, not really from the car perspective because the track changes so much, it can throw you off into left field one day into the next, it’s like a dirt track.”

With the chance to drive for Donnie Wilson, he feels more confident going into Friday night than he has been in his previous races behind the wheel of a Super Late Model.  While Honeycutt admits he still has a ways to go in terms of learning, the Summer Sizzler 75 can be a proving ground for the 17-year-old.

“Just go after a top-three and go with the mindset of racing people the right way and be there at the end and see where you end up.  I feel like if we can do that and be in a position to be in the top-five at the end of the race, we can have a really good finish.  A win’s kind of a stretch right now because I haven’t been close to a win in a Super Late Model race, even with running in the top-five, top-ten in the Snowball last year, I’ve still got a lot to learn.  We’ll see, I think we can run very well.”

Friday's Southern Super Series event at Five Flags Speedway will be streamed live on Speed51, with more information on the broadcast coming later this week.