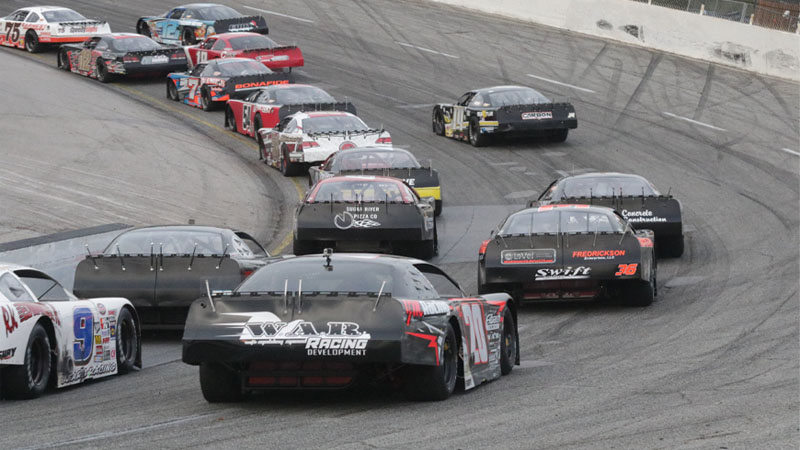 Two months removed from the originally-scheduled Blizzard Series opener, Super Late Model racing at Five Flags Speedway begins this weekend with the Rowdy Energy Twin 100s featuring the #Forever11 Tribute 100 Friday night.  A strong field of drivers from around the country have entered for the two events, which will act as the first tune-up for the 53rd Annual Snowball Derby.

Leading off the entry list for the Twin 100’s is perennial Blizzard Series dominator Bubba Pollard.  The Georgia driver has won eight of the last 12 Blizzard Series races and will go for two more this weekend.  He will be fielding a second car for the weekend, with Terry Senneker behind the wheel.

Stephen Nasse will head to Five Flags Speedway looking for his first Blizzard Series win this weekend.  This will be the first time he competes at the Pensacola oval since he was disqualified for a titanium violation in the brake system after crossing the finish line first in last December’s Snowball Derby.

Central Florida standout Jesse Dutilly will make the trip north once again to compete with the Blizzard Series.  He won last year’s Blizzard finale last September for his first checkered flag at the track.

Three-time Summer Showdown winner Preston Peltier will make the long haul from Las Vegas for his first Blizzard Series start since 2015.  He won’t be the only driver making the trip from out west, with California racer Bob Lyon traveling cross-country to make his first start at Five Flags since an ALL PRO Super Series event in 1988.

Several Florida drivers have entered for this weekend.  George Gorham, Nick Neri, Jeremy Pate, Daniel Dye, Michael Atwell, and Kyle Bryant will all look to keep the trophies in the Sunshine State.

Former Southern Super Series champion Donnie Wilson is entered for one of his select starts in 2020 as he shifts to a car owner role.  These will be his first races of 2020.

The Rowdy Energy Twin 100s will be broadcasted live this weekend on Speed51, presented by JEGS.  Click here to purchase your PPV tickets for both events.

Southern Super Series to Crown Champion at All American 400