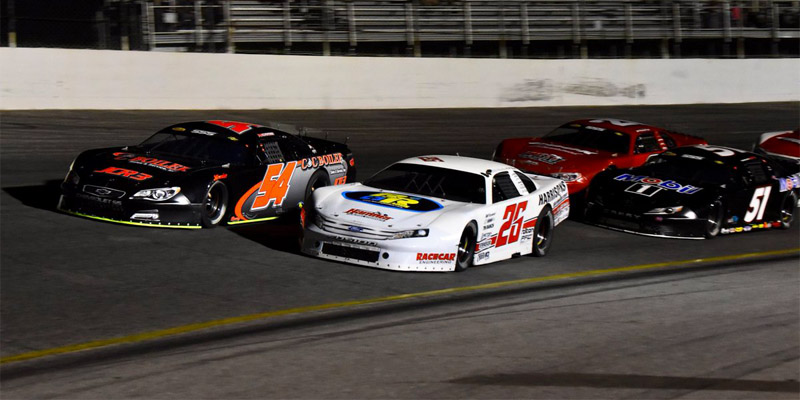 With the better part of two months of racing now lost as a result of the COVID-19 pandemic, many short track racing promoters are looking for creative solutions to carry out their 2020 racing programs.  One such promoter is Tim Bryant at Five Flags Speedway, who will be giving racers and fans double the fun during one weekend in June.

Bryant announced on Speed51’s “The Bullring” that the venue will host a doubleheader weekend for the Southern Super Series and Blizzard Series on June 26-27.

With several events at the track lost in March and April due to the pandemic, a schedule shakeup will allow two season openers to be made up.  The Modifieds of Mayhem will now race on June 19, while what was originally the second race of the Blizzard season has been moved to June 26.

The Pensacola, Florida half-mile will take that opportunity to also make up the Blizzard Series opener originally scheduled for April 24, putting on a double-header weekend for Super Late Model competitors on June 26-27.

“We’re going to run the Modified of Mayhem on June 19, along with a couple of local divisions,” explained Bryant.  “We are moving the Blizzard/Southern Super Series event one week later to June 26. We will be running a Super Late Model race.  To make that a little more enticing for racers to come down, we’re going to give them the doubleheader they asked for.

“We’re going to race on Friday night, June 26, and then come back Saturday, June 27 with another complete program for Super Late Models.  Not a two-day show for one race, two completely separate races.  We’re hoping we can make up a bit of ground we lost by doing that.  Our team will be getting together in the coming days to put together the format for that event.”

It’s a move that will be favorable for drivers, saving them the effort and expense of traveling to two separate races on two separate weekends.  At this point, Bryant noted, any move that allows racers to race is one received well by his competitors.

“We’ve talked to a few drivers, and they seem very excited about the prospect of running two races at one track, without adding to the travel expense.  For the most part, they’ll race anywhere, anytime.  Just drop the green flag and I’ll be there.”

Bryant did not rule out the possibility for further changes to his schedule, in light of the ongoing pandemic.  The track is scheduled to host an event for local divisions on May 8 for its next racing program.

“There are a lot of moving pieces.  We have our next event scheduled just a week from this Friday and we’re, by the day, trying to coordinate with local authorities and government regulations to see what we can do properly.

“We still have a glimmer of hope that we can race on May 8.  We’re expecting more words to come from our Governor tomorrow to see if we can race and what kind of regulations we’ll have to conduct those races.”

Bryant is also open to utilizing adjusted attendance policies if that is what it takes to contest races, whether it be limited attendance or pay-per-view broadcasts for events.

“Not knowing exactly what the guidelines are going to be for our races in the coming weeks.  If it’s going to be something like a 35-percent capacity crowd, we feel like we can live with that.  The pay-per-view thing has really worked out well for us.  The Speed51 broadcasts have been outstanding at our track and placed the infrastructure here for multiple cameras. We’ve brought in fiber-optic network to make the broadcasts more clear.

“I don’t know what travel conditions will be like, come June.  We look forward to adding that to the pay-per-view lineup if that is in order.”

During the Bullring interview, Bryant also discussed the upcoming 44th Annual Rattler Weekend, the postponement of the Peach State Classic and more.  To see the full interview, watch an on-demand replay of “The Bullring” by clicking here.