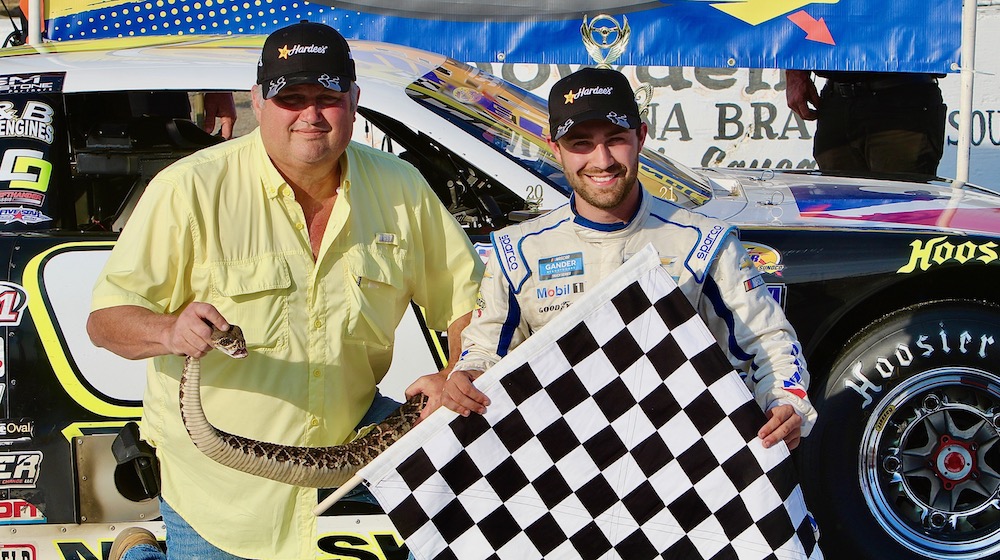 On Sunday afternoon at South Alabama Speedway, Majeski entered a class of his own by becoming the only driver to win the Rattler 250 four times during the event’s 45-year history.

Ty Majeski calls Seymour, Wisconsin his hometown and currently resides in Charlotte, North Carolina but the small town of Kinston, Alabama has felt like home to him in recent years.  On Sunday afternoon at South Alabama Speedway, Majeski entered a class of his own by becoming the only driver to win the Rattler 250 four times during the event’s 45-year history.

The win broke a tie with racing legend Ronnie Sanders, who won The Rattler three times during his career.  Even more impressive, Majeski’s fourth win came in just his sixth career start in the prestigious Super Late Model race.  It was also his fourth win in his last five attempts after not competing in 2018.

“It was our day today and I’m thankful for it,” Majeski said.  “It means a lot as a Midwest team.  These guys are tough in the south.  As a midwestern guy, we like to come down here and beat up on the southern guys as they like to come to our stomping grounds and beat up on us.  It’s always fun when you can come to a different region and perform well, and that’s what we’ve been able to do.”

The box score will show that Majeski led all but the first 15 laps of Sunday’s race, which eventually went 252 laps in distance.  However, the win didn’t come as easy as it may look on paper.

After three cautions slowed the pace during the final 10 laps, Majeski fended off a late-race charge from defending Southern Super Series champion Stephen Nasse to score the victory.  Nasse began applying heave pressure to Majeski with five laps to go before a caution brought their battle to a halt with five laps remaining.

Nasse’s runner-up finish came after his team replaced a fuel pump belt on the No. 51 Super Late Model during a red flag on Lap 56.  The polesitter raced back to the front only to be disappointed when he came up one spot short.

“Definitely didn’t want to see that last caution,” Nasse said.  “I’m not sure why the 22 (Sammy Smith) didn’t just pull off the race track.  He doesn’t know what he’s doing on the track most of the time, so it doesn’t really surprise me.  It’s unfortunate.  My Jett Motorsports team worked so hard.  We had the unfortunate belt break for us and that killed us.  We were able to rally back to the front.  With about 10 to go I was starting to reel Ty in and was on his bumper.  I felt like I could’ve made a move then, but I was kind of waiting and waiting.  I didn’t want to get into him too hard so I wasn’t waiting for him to slip up and get underneath him.  But Ty is a heck of a wheelman and I had fun battling with him.”

Majeski’s win on Sunday afternoon came in his first start since winning the Snowball Derby at Five Flags Speedway in December.

When asked what makes him so tough to beat at South Alabama Speedway, he referenced how similar the track is to tracks close to home in Wisconsin.

“This race track is a lot like some of the race tracks we race up at home,” Majeski said.  “This surface isn’t as abrasive as some of the other race tracks in the south like Pensacola or Nashville, so this place is a little less abrasive and fits our package from the Midwest.  I’m really thankful I have the opportunity to come down here and drive these great race cars.”

New Hampshire driver Derek Griffith battled back from going a lap down to finish fourth, while Georgia driver Kyle Plott kicked off the Southern Super Series season with a top-five finish.

A full replay of Sunday’s race, as well as race highlights and a race recap, will be available soon on Speed51.TV.