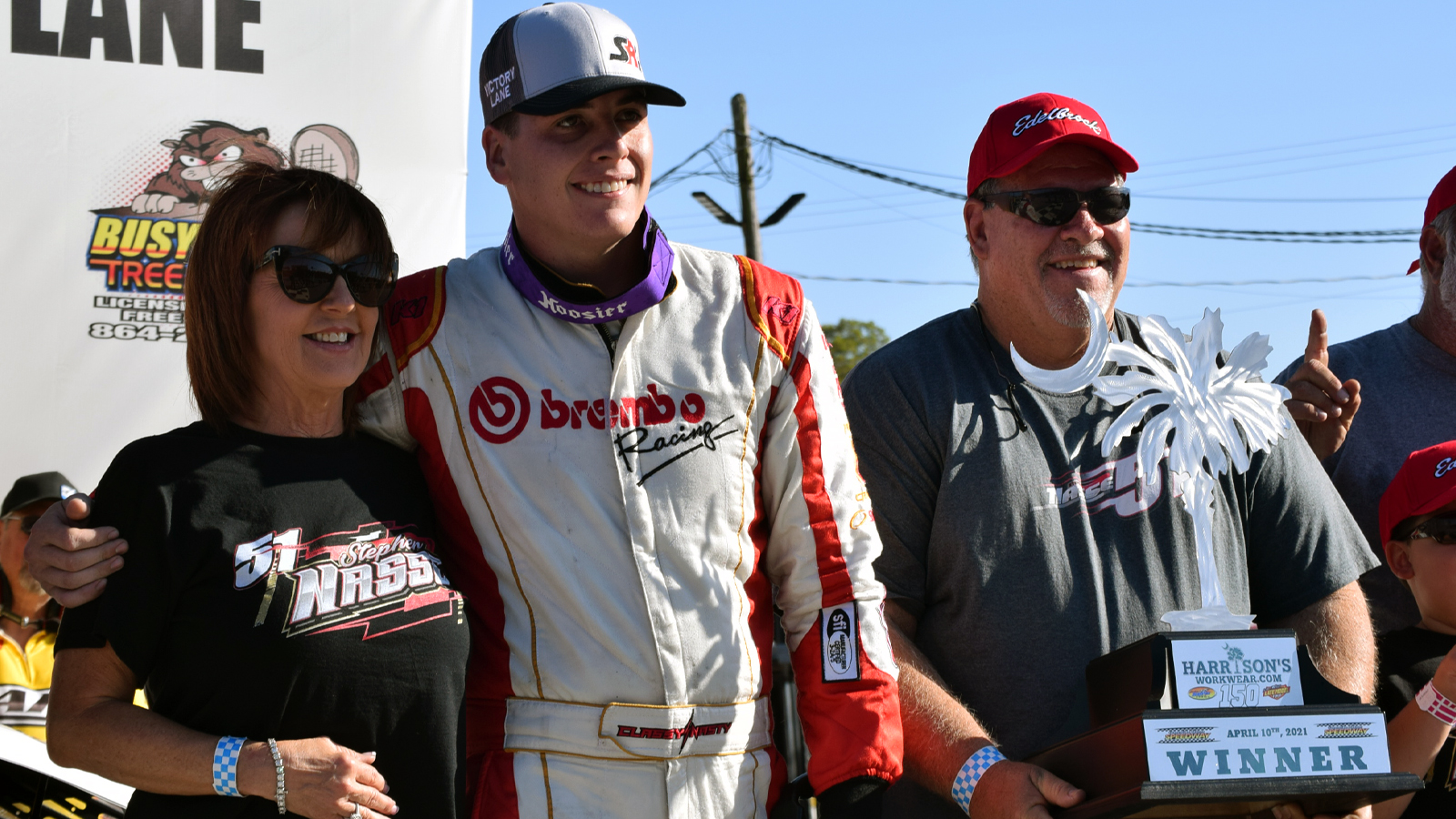 Using a late-race restart to his advantage, defending Southern Super Series champion Stephen Nasse took the Super Late Model win at Greenville-Pickens Speedway over Carson Kvapil and Sammy Smith on Sunday in a co-sanctioned event between SSS and the CARS Tour.

Using a late-race restart to his advantage, defending Southern Super Series champion Stephen Nasse took the Super Late Model win at Greenville-Pickens Speedway over Carson Kvapil and Sammy Smith on Sunday in a co-sanctioned event between SSS and the CARS Tour.

Smith claimed the lead just inside of 50 laps to go following a competition caution which allowed the field to take its allotment of fresh tires in the 150-lap race and make final adjustments for the run to the finish.  However, Nasse slowly reeled in the Donnie Wilson Motorsports driver over the closing laps of the race.

In a Super Late Model showdown co-sanctioned by the CARS Tour and Southern Super Series, Stephen Nasse took the win on a late-race restart ahead of Carson Kvapil and Sammy Smith.

Just as it appeared the battle for the lead would intensify, the caution flag flew with three laps to go for a turn four incident involving Jake Garcia and Hudson Halder.  On the ensuing restart, Nasse pulled ahead of Smith to take the win.

By Nasse’s own admission, he would have preferred to see how his battle with Smith would have played out without the yellow flag.

“It was definitely a nail biter.  I really wish that last caution hadn’t come out for us,” Nasse told Speed51.  “I think it would have been a good show for the fans.  I wasn’t going to wreck the 22 for the win, but I definitely would have gotten into him.

Still, Nasse prevailed on the final restart.  He tipped his cap to Smith for racing him clean in the late-race shootout.

“The restart zone here is so small.  It’s basically a car-length, you know when they’re going to go.  I got lucky and got a jump on him going into one.  He could have run me up the track.  I appreciate that he didn’t do that, and I will remember that going into the next ones when I see him again.”

Smith ultimately fell to third on the final restart after taking the lead on lap 104.  He admitted that his car was starting to fade over the closing laps, but also hoped to battle Nasse heads-up for the win.

We struggled the last 50 laps,” said Smith.  “Me and Nasse were pretty close.  I think he would have had to move me to win, but it would have been closer than what we had.  He got a better start than me, I didn’t have a good start.

“Off of two, the 26 [of Chandler Smith] had me all jacked up and I couldn’t go anywhere.  It was just a bad deal, I guess.  Frustrating, but thanks to the Donnie Wilson guys for giving me a good car.”

“It was just so close.  It’s frustrating, but I guess I just have to get better and we’ll come back.”

Kvapil, a CARS Tour winner in their 2021 season opener at Hickory Motor Speedway in March, led the first 103 laps after starting on the pole.  Kvapil relinquished the lead to Smith and fell to fourth in the final stanza of the race before capitalizing on the three-lap shootout.

“We had a really fast car.  I was really happy with it the first 100,” said Kvapil.  “I thought we were beyond better than everyone else, just saving.  We pitted just a little bit, tightened it up just a little bit and it got really bad, just undriveable.  Fortunately, we were able to capitalize on that late-race restart and finish second.”