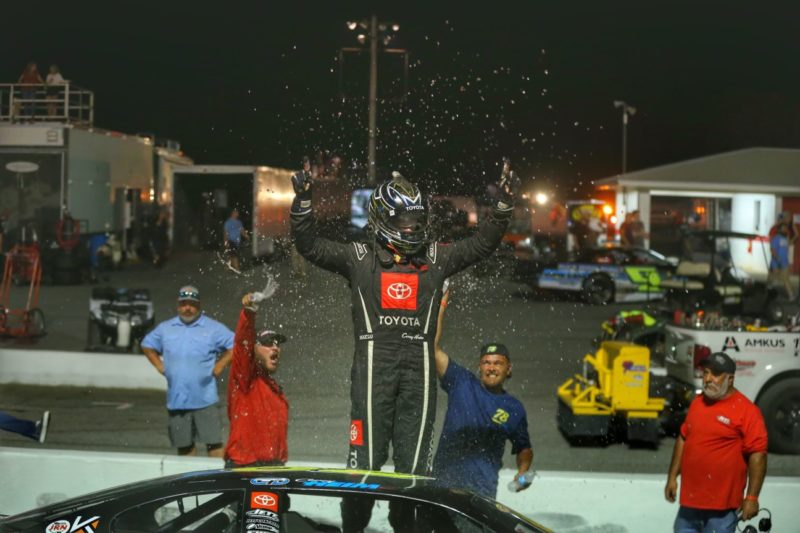 At times during the Southern Super Series portion of the Georgia Spring Nationals, the lead was about the last place drivers wanted to be. Three separate incidents involving a race leader occurred within a 25 lap stretch during Saturday night’s race, with nights ending prematurely for Stephen Nasse and Kyle Plott.

At times during the Southern Super Series portion of the Georgia Spring Nationals, the lead was about the last place drivers wanted to be.  Three separate incidents involving a race leader occurred within a 25 lap stretch during Saturday night’s race, with nights ending prematurely for Stephen Nasse and Kyle Plott.

Corey Heim was in one of three said incidents, when he and Jett Noland were sent to the tail after contact between the two sent Noland around while racing for the lead.  However, the Georgia driver wasted little time getting back through the field.

WATCH A REPLAY OF THE GEORGIA SPRING NATIONALS ON SPEED51.TV

The ARCA Menards Series points leader passed fast qualifier Hunter Robbins with just under 25 to go and held off Jake Garcia during a green-white-checkered restart to win his second race of 2021.

“Overall it was a great race, we had some hiccups there in the middle of the race.  Everyone raced me clean for the most part and we dealt with the ones who didn’t,” Heim said on the Speed51.TV broadcast.  “We made our way back to the front and had a great race.”

Corey Heim now has a Super Late Model win in 2021 to go along with his ARCA Menards Series win at Daytona. (Photo Credit: Speed51/Ryan Nuttleman)

While Heim had previously won CRA SpeedFest at Crisp Motorsports Park in 2020, the Georgia Spring Nationals would mark his first-career win with the Southern Super Series.  He now has three career Super Late Model wins to his credit, two coming in Cordele and one with the CARS SLM Tour at South Boston Speedway.

The Southern Super Series field is really good.  We got a little lucky with a couple people falling out throughout the race.  Stephen (Nasse) had a really good car, if he would've made it to the end I think we would've had a great race.  I can't thank Jett Motorsports and Toyota enough for everything they do with bringing a fast race car, I can't wait to do more races with them.

After a series of late-race yellows, Jake Garcia suddenly found himself with a chance to steal his first-career Super Late Model win at the same facility that he won his first Pro Late Model race at.  While his efforts would come up just short, he was pleased to end the race on a high note after a roller coaster of a race.

"It was definitely a handful there.  We went to the back for a little bit and went back to the front, it was a up-and-down day but we were up there when it counted and managed to keep our second place position," said Garcia.  "We made good adjustments there when we pitted and it really helped us out during those restarts at the end of the race."