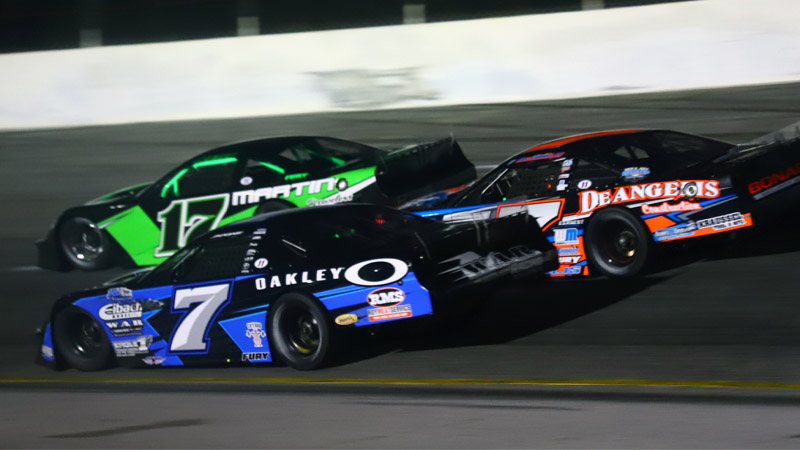 The road to the 53rd Annual Snowball Derby continues on Friday, July 31, with the Southern Super Series and Blizzard Series returning to the Pensacola, Florida speedplant.  The event will have big money on the line, with the possibility for one driver to win $15,000 in the Summer Sizzler 75.

The Summer Sizzler 75 will feature a special format which debuted last year, with 10-lap qualifying heat races setting the field for the 75-lap main event.  As always, the winner of the feature will win a minimum of $5,000.

With the Southern Super Series’ “Double Down at the Next Town” program, drivers who competed in the Rumble by the River 125 at Montgomery Motor Speedway (AL) will be eligible for a $5,000 bonus, which would make a $10,000 winner if one of those drivers takes the checkered flag.

Meanwhile, Phoenix Construction has once again stepped up to provide a $5,000 bonus.  During the Rowdy Energy Twin 100s weekend at Five Flags, Phoenix offered a $5,000 for the driver with the best average finish across the two 100-lap Blizzard Series events.

This time, Phoenix Construction will offer a $5,000 bonus to the winner, as long as the winner finishes within the top four positions in his/her heat race.

"We're very fortunate to have a guy like James Finch involved in our sport,” said Five Flags Speedway promoter Tim Bryant.  “While he occasionally lends support to individual drivers, at the end of the day he is very passionate about short track racing and wants to play a role in helping it thrive."

Thus, it is possible for one driver to win $15,000 in the next Blizzard Series event.  As long as the winner of the Summer Sizzler 75 finishes in the top four in a heat race and competed in the Rumble by the River 125, that driver will capture all the bonus opportunities and pocket $10,000 in bonus money on top of the $5,000 winner’s check.

When the Blizzard Series last took the track in June, Bubba Pollard did just that, claiming the Double Down bonus as well as Phoenix Construction’s average finish bonus to walk away with three $5,000 checks.  The Summer Sizzler 75 will offer another opportunity for a large payday.

Pollard also won the Rumble by the River 125 at Montgomery, which means the Georgia racer will be one of those eligible for the Double Down in the Next Town on July 31.

Stay tuned to Speed51, southernsuperseries.com and 5flagsspeedway.com for more information regarding the Summer Sizzler 75 as next week’s race approaches.